Forced landing April 22, out of fuel

An Asia Airways Antonov AN-26 freighter, registration EY-322 performing a positioning flight from Djibouti (Djibouti) to Khartoum (Sudan) with 5 crew, ran out of fuel about 40nm short of Khartoum Airport and was forced to land in open terrain. There were no injuries, the aircraft sustained substantial damage however. 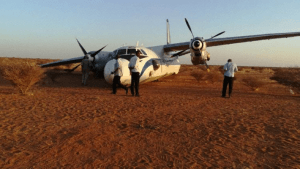