A Venezolana Boeing 737-200, registration YV502T performing flight VNE-1303 from Port of Spain (Trinidad and Tobago) to Caracas (Venezuela) with 79 people on board, was climbing out of Port of Spain when the left hand engine (JT8D) failed emitting a loud bang. The crew stopped the climb and returned to Port of Spain for a safe landing about 23 minutes after departure. 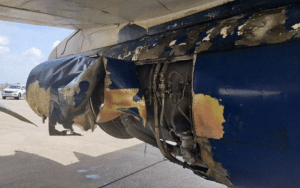