A Commutair Embraer ERJ-145 on behalf of United, registration N14171 performing flight CS-4933/UA-4933 from Newark, NJ to Presque Isle, ME (USA) with 28 passengers and 3 crew, was on final approach to Presque Isle’s runway 01 when the crew initiated a go around from about 2000 feet MSL. The aircraft positioned for another approach to runway 01 and continued for a hard touch down at 12:27L (16:27Z), the aircraft veered right off the runway, all gear collapsed. A pilot and three passengers received minor injuries, the aircraft sustained substantial damage. 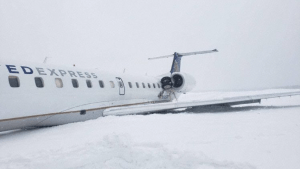