A Saha Airlines Boeing 707-300 freighter, registration EP-CPP performing a freight flight from Bishkek (Kyrgyzstan) to Karaj (Iran) with 16 crew and a cargo of meat, was on approach to Karaj’s Payam Airport’s runway 30 (length 3660 meters/12,000 feet) when the crew descended towards and landed on Fath’s airport 31L (length 1000 meters/3300 feet), overran the runway, broke through an airport perimeter wall, crashed into houses past the end of the runway and burst into flames at about 08:30L (03:00Z). So far one survivor (the flight engineer) and 16 bodies have been recovered. A number of houses were damaged.

Emergency services reported 16 bodies (15 male, 1 female) have been recovered so far. One survivor was taken to a hospital.

Another aircraft had confused the same airports but gone around in time, see Incident: Taban MD88 at Karaj on Nov 16th 2018, went around from very low height at wrong airport.

Iran’s Air Force confirmed the aircraft belonged to Saha Airlines. The only survivor recovered so far was the flight engineer on board of the aircraft. 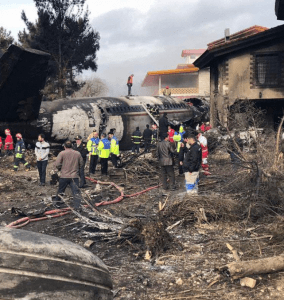