More than 16 inches of dense, wet snow that fell Tuesday night on the Truckee Tahoe Airport caused a business jet to pull some on-ground aerobatics on Wednesday morning.

The snow, regionally dubbed “Sierra cement” for its thick, heavy and sticky texture, piled on the tail and rear-mounted engines of a Cessna Citation X aircraft parked at the airport.

The weight caused the nose of the jet to lift off the ground, resting on its tail in a stationary wheelie.

“That aircraft (has) really massive engines in the rear, so they tend to be a little tail heavy anyway,” said Mark Lamb, aviation and community services manager at the airport.

Business jets like the citation are generally moved from the Truckee airport when big winter storms are forecast, but in this case the jet was down for maintenance and couldn’t take off, according to Lamb.

A business jet like the Citation is generally supported by a tail stand while it’s on the ground, which would prevent the nose from lifting if weight (like Sierra cement snow) were to be added to the already heavy tail.

Lamb could not say if the Citation at Truckee Tahoe had such a tail stand during the storm Tuesday night. 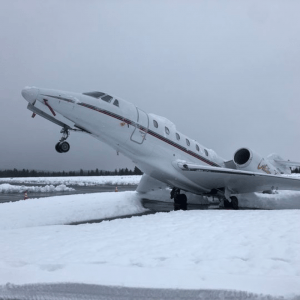