Operators of the Airbus A321neo have been issued with an airworthiness directive by the European Aviation and Space Agency (EASA) alerting it to a problem that could cause the nose to pitch up.

According to EASA Airworthiness Directive 2019-0171, the behaviour of the Elevator Aileron Computer unit installed on A321neo can cause ‘excessive pitch attitude’ that could result in ‘reduced control of the aeroplane’.

The fault is most likely to occur on the final approach phase, particularly if a ‘hard manoeuvre’ is attempted, such as a large correction to the aircraft’s angle of attack (AoA).

The temporary revision instructs airlines not to load their A321neos with a centre of gravity (CoG) as far rearward as currently permitted so the weight is not towards the rear of the aircraft and the directive dictates Airlines must change the Aircraft Flight Manuals accordingly.

Whilst seemingly not as serious as the fault with the Boeing 737 Max aircraft that resulted in two fatal accidents, the news will come as a blow to Airbus that has seen orders for its single-aisle aircraft shoot up as confidence in the 737 Max drops.

As a result, Airbus has stressed that the fault with the ELAC unit can only occur “in certain and remote conditions and in combination with specific commanded manoeuvres”.

Airbus expects to have its flight control system fine-tuned and a permanent solution to the problem in place by Q3 2020.

Unlike the Boeing 737 Max, A321neo’s will continue to be allowed to fly.

Accident: Sky Express AT42, Jul 12th 2019, runway excursion on backtrack and roll back

Recent data indicates that applying a 15 percent safety margin to calculate wet runway stopping distance, as recommended by previous guidance, may be inadequate in certain conditions to prevent a runway excursion, according to a new safety alert for pilots (SAFO 19003). This new alert replaces the guidance in previous SAFO 15009.

“Several recent runway-landing incidents/accidents have raised concerns with wet runway stopping performance assumptions,” according to this new alert. “Analysis of the stopping data from these incidents/accidents indicates the braking coefficient of friction in each case was significantly lower than expected for a wet runway.” These mishaps occurred on both grooved and un-grooved runways.

Takeoff and Landing Performance Assessment (Talpa) procedures implemented by the FAA on Oct. 1, 2016, added new insight as to how flight crews can evaluate runway braking performance before landing. Talpa defines a “wet runway” as damp to 1/8-inch depth or less of water, while a “contaminated runway” is a surface covered with “greater than 1/8-inch of water.”

The FAA recommends that airports report “wet” conditions, but that is not required. Further, an airport may not be able to generate an accurate report from sudden rain showers that result in water on the runway more than 1/8 of an inch in depth (“contaminated”). The alert concludes that because “Rainfall intensity may be the only indication available to the pilot that the water depth present on the runway may be excessive, it is recommended that pilots use landing performance data associated with medium to poor braking.” However, the FAA notes that using all available data to prevent a contaminated runway excursion is moot when the landings involve delayed touchdowns, improper application of deceleration devices and landing with a tailwind. 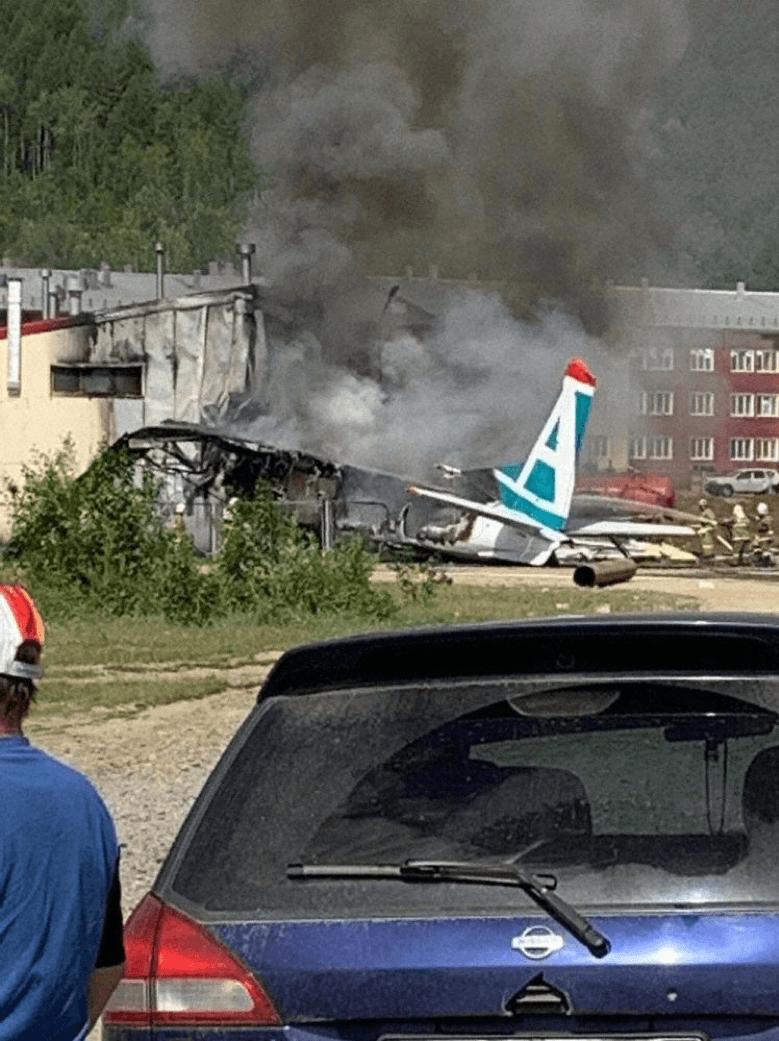 A Venezolana Boeing 737-200, registration YV502T performing flight VNE-1303 from Port of Spain (Trinidad and Tobago) to Caracas (Venezuela) with 79 people on board, was climbing out of Port of Spain when the left hand engine (JT8D) failed emitting a loud bang. The crew stopped the climb and returned to Port of Spain for a safe landing about 23 minutes after departure.

The AOPA Air Safety Institute has issued an ASI Safety Notice calling pilots’ attention to the problem of jet fuel being contaminated with diesel exhaust fluid, which is not approved for use in aircraft and has caused engine failure or significant damage to aircraft engines and fuel systems in several instances.

The safety notice posted on the Air Safety Institute and AOPA websites was prompted by a May 9 fuel-contamination incident that caused two Cessna Citation jets that received tainted fuel in Punta Gorda, Florida, to experience in-flight failures-in one case of both engines, and in the other instance, of one of two engines. Both aircraft landed safely.

Diesel exhaust fluid, or DEF, is not intended for use in aircraft but is used to reduce emissions in diesel engines such as those in ground vehicles. When added to jet fuel, DEF can trigger reactions including the formation of crystals that can plug fuel filters and damage engine components.

In a letter to Acting FAA Administrator Daniel K. Elwell, AOPA President Mark Baker noted that the May 9 incident was the third in the last 18 months in which DEF was mistakenly added to aircraft fuel in separate locations, presumably in place of icing-inhibitor fluid. Both fluids are clear and colourless.

“We believed the first contamination event in November 2017 to be a unique situation and unlikely to reoccur. Unfortunately, a second occurred in August 2018,” Baker wrote, adding that the incidents led to the creation of an industry working group “to study factors surrounding these events, develop mitigation strategies, and recommend both short and long-term actions for industry and the FAA to implement.”

The ASI Safety Notice urges pilots to inquire if your fuel providers use DEF in ground equipment and about procedures to confirm that only the correct additives are used for jet fuel. Procedures should include separate storage, clear labelling, confirmation of correct additives at the time of insertion, and personnel training.

Noting that there are no known pre-flight procedures pilots can use to identify the presence of DEF in jet fuel, the notice raises pilots’ awareness that if engine failure occurs due to turbine flameout, DEF contamination is a possible cause. “Follow emergency checklist procedures for engine failure and realize if DEF contamination is the cause, successful restart is unlikely,” it cautions, noting that the loss of remaining engines is likely.

If DEF contamination is suspected, pilots should notify the fixed-base operator where fuel was obtained as soon as possible, and document and report the incident to the local FAA office immediately.

Baker’s letter said he expected the industry working group to issue its recommendations shortly. “Any assistance the FAA can provide to work with industry and quickly implement the mitigation strategies identified in the report will be appreciated,” he wrote to Elwell.

Forced landing April 22, out of fuel

An Asia Airways Antonov AN-26 freighter, registration EY-322 performing a positioning flight from Djibouti (Djibouti) to Khartoum (Sudan) with 5 crew, ran out of fuel about 40nm short of Khartoum Airport and was forced to land in open terrain. There were no injuries, the aircraft sustained substantial damage however.

A Commutair Embraer ERJ-145 on behalf of United, registration N14171 performing flight CS-4933/UA-4933 from Newark, NJ to Presque Isle, ME (USA) with 28 passengers and 3 crew, was on final approach to Presque Isle’s runway 01 when the crew initiated a go around from about 2000 feet MSL. The aircraft positioned for another approach to runway 01 and continued for a hard touch down at 12:27L (16:27Z), the aircraft veered right off the runway, all gear collapsed. A pilot and three passengers received minor injuries, the aircraft sustained substantial damage.

On the morning of January 11th 2018 rain showers were present, the temperature was around freezing point and the runway braking action was poor at Reykjavik Airport (BIRK). It was decided to sand both runways.

At 10:04 the controller contacted the flight crew of a Cessna 525A CitationJet CJ2, N525FF, and informed them of the braking action on runway 19. The flight crew decided to proceed and were cleared to “Hold short RWY 19.” This was read back correctly by the flight crew.

At 10:07 the Tower controller gave the flight crew of N525FF the following instructions: “525FF Backtrack line up RWY 19,” which was also read back correctly by the flight crew.

While the Tower controller was focused on communications, he did not notice that the flight crew of airplane N525FF started their take-off roll on RWY 19 after having turned at the runway end.

According to the Pilot Flying (PF) of N525FF, he recalled that they had been cleared to taxi and backtrack runway 19. When they turned around to line up on runway 19, the PF also recalled that the PNF transmitted that they were “ready for departure”. At this time the PF had already increased the thrust significantly and the aircraft started to slide on the ice, so the commander (PF) said “we have to go” and commenced the take-off.

The ITSB analysis of the ATC recordings concluded that said transmission by the PF “ready for departure”, did not take place.

The ITSB believes that if all the communications on the tower frequency would have been in English, then the flight crew of airplane N525FF might have been aware that RWY 13 was being sanded
Sources: